Chapter 8.1 - Sum of Interior/Exterior Angles of a Polygon

The sum of the interior angles of a polygon are equal to the number of triangles you can make inside the polygon times 180. The formula for this would be (n - 2)180=Total Degrees, where n is the number of sides of the given polygon.

The sum of all exterior angles of convex polygons is always 360. To find a single angle's degree, simply divide by the number of sides.

Sum of interior angles of a polygon. 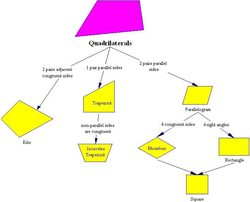 We studied several types of Quadrilaterals starting with the general term and going into parallelograms, trapezoid, rhombus, rectengle square, and kite. Each of these shapes have destinct properties that need to be known.

Properties of Quadrilaterals
Powered by